@midnight (A.K.A. @midnight with Chris Hardwick) is an American late-night Internet-based combination scripted, rehearsed and improv panel game show hosted by podcaster and stand-up comedian Chris Hardwick. It aired on Comedy Central from 2013 - 2017.

Each episode featured three comedians competing against one another in a series of Internet-inspired games (some of which required improvisation, but also allowed for some prepared jokes), which varied from episode to episode.

Host Chris Hardwick began each game by introducing some Internet meme trending that day, and asked the panel of comedians to craft a funny response or choose the correct answer among multiple choices. Contestants were awarded points by Hardwick (who loudly announced "Points!") for each funny or correct answer. The "points" system wais ultimately arbitrary.

This continued through about five segments, after which the third-place contestant was usually eliminated from the game and was doused in red light. During special episodes, Hardwick may have kept all three contestants in the game after the fifth segment (if the third-place contestant was lucky enough). Hardwick then introduced the final game – "FTW" (For The Win) – and tossed to a commercial break, during which the remaining contestants crafted their responses.

After returning from commercial, Hardwick "wiped" the remaining comedians' scores and read each of their (anonymous) answers in turn. The comedian whose response generated the most laughter/applause from the studio audience "wins the Internet" for the day.

Each episode included a segment called "Hashtag Wars", in which the contestants must make up jokes based on a simple premise that could be a trending internet hashtag topic (i.e. #DrunkBroadway, #SadToys, or #CheapBooks). Fans of the show weare invited to contribute their own hashtags via Twitter, tagging @midnight in order to be considered. Each episode declared an online winner for the previous episode's game. This game often featured entries from well-known performers and comedians, including Frank Conniff. 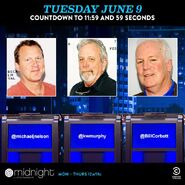 Online promo for the episode.

Promo photo during filming of the episode

4/18/2017
Add a photo to this gallery
Retrieved from "https://mst3k.fandom.com/wiki/@midnight?oldid=62431"
Community content is available under CC-BY-SA unless otherwise noted.