Basil Rathbone (1892-1967) was an actor born in South Africa. As a child his family emigrated to England.

Rathbone achieved renown for his performance as Sherlock Holmes in several films. He also played Baron Frankenstein in Universal Pictures' Son of Frankenstein (opposite Bela Lugosi).

Appearing in The Magic Sword

Appearing in Hillbillys in a Haunted House

Appearing in The Woman in Green 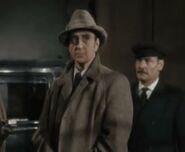 Appearing in Dressed to Kill

Appearing (left) in Terror By Night

Appearing (left) in Sherlock Holmes and the Secret Weapon
Add a photo to this gallery
Retrieved from "https://mst3k.fandom.com/wiki/Basil_Rathbone?oldid=58693"
Community content is available under CC-BY-SA unless otherwise noted.