Ms. McKeever is a Twin Cities native. She attended the University of Minnesota (like Peter Graves), where she earned a degree in Theater Arts. During college, she claims to have waited on Frank Conniff and Mary Jo Pehl while working in a restaurant. She briefly had a job at a company that makes the large, life-size costumes for Muppets characters in ice arenas and other venues.

After college, McKeever submitted a resume to Best Brains and was hired at the beginning of Season 7. She began assisting Prop Master Helena Espinosa, who had taken the position after Toolmaster Jef Maynard and Patrick Brantseg departed. By the middle of the season, her title was "Prop Assistant". After Season 7, Espinosa departed and Brantseg returned. McKeever was then promoted to the position of "Prop Diva".

McKeever and Brantseg shared prop-making duties and she was also responsible for creating or acquiring the costumes seen on the show. She was also responsible for purchasing the disparate items that were made into props, costumes, or set pieces. She also assisted with production in other ways (see Notes below). In her costume-making duties, she reportedly tried her best to make the costumes comfortable even when they silly or impractical.

Ms. McKeever began appearing on-camera in Season 7's The Incredible Melting Man as part of the focus group. She then appeared several times during Seasons 8 and 9. She continued to work as "Prop Diva", but did not appear on-camera during Season 10.

Following the end of Mystery Science Theater 3000, Ms. McKeever remained associated with the subsequent projects of several of the other performers and writers. She made props for the four Film Crew productions, and also provided the voice of Bob Honcho's secretary. She also performed in and designed costumes for the interactive media experience Darkstar, which also featured several former MST3K actors (and Peter Graves).

Beth McKeever returned for the crowd-funded revival of Mystery Science Theater 3000 in 2017. She provided puppet costumes for several episodes in Season 11 and for Experiment #1201 Mac and Me in Season 12. In June of 2021, Joel Hodgson announced that Beez McKeever would be part of the writing staff for Season 13, in addition to her work on props and costumes.

Beez in Darkstar: The Interactive Movie

Beez on the set of the series finale

Beez poses with a fan 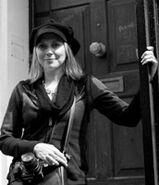 Beez as Steffi in The Touch of Satan

Community content is available under CC-BY-SA unless otherwise noted.