Bela Lugosi (1882-1956, born Bela Ferenc Dezso Blasko) was a Hungarian actor. He shot to stardom in the title role of the 1931 film version of Bram Stoker's Dracula and set the standard for movie vampires.

A successful stage actor in his native Hungary and in Germany, he emigrated to the United States in the 1920s and played various character roles until grabbing the lead in the stage production of Dracula in 1927. Lugosi's talent for playing a villain led to a career of playing monsters and mad scientists. Some of his more memorable movies include The Black Cat (1934), Ninotchka (1939, starring Greta Garbo) and The Wolfman (1941). He also created the role of Ygor, hunchbacked assistant to Dr. Frankenstein, a character that would become a staple of Frankenstein films for many years. He portrayed Ygor in both The Son of Frankenstein and The Ghost of Frankenstein before going on to play the Monster in Frankenstein Meets the Wolfman. At the suggestion of Paul Marco, Lugosi recreated his iconic role as Dracula in 1948's Abbott and Costello Meet Frankenstein

After years of declining fortunes in Hollywood, he appeared in the Ed Wood film Glen or Glenda in 1953 for the sake of money. This began his famous working relationship with Wood, eventually leading to Bride of the Monster. During this time, Lugosi committed himself to an institution for an addiction to methadone.

Footage shot shortly before he died was utilized by writer/director Edward D. Wood Jr. in what has been called one of the worst movies ever made, Plan 9 from Outer Space (released in 1959).[1] On a happier note, his works increased in popularity after his death and he is now highly-regarded as a luminary among horror movie actors.

Appearing in The Corpse Vanishes

Appearing in Bride of the Monster

Appearing in Plan 9 from Outer Space

Appearing in Scared to Death 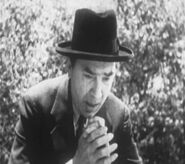 Appearing in The Phantom Creeps 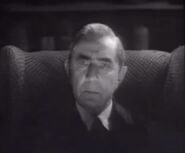 Appearing in Glen or Glenda
Add a photo to this gallery

Retrieved from "https://mst3k.fandom.com/wiki/Bela_Lugosi?oldid=56618"
Community content is available under CC-BY-SA unless otherwise noted.