Cambot is only seen during the "Robot Roll Call" portion of the opening credits, often with his name reversed, presumably to imply he are shooting his own image in a mirror. Cambot's appearance was changed with almost every re-shooting of the opening credits, most likely since there was little need to keep the puppet around once its one appearance had been shot. While originally being shown as a separate robot operating a camera during the Season K, Cambot would later be changed to a robot with a built-in camera during the show's national run.

When the Satellite of Love crashed on Earth in the show's final episode, Cambot lived with Tom, Crow, and Mike in their one-bedroom apartment, and viewed them watching the first part of The Crawling Eye. The Cambot character was inferred in Mystery Science Theater 3000: The Movie, but is never acknowledged by any of the characters.

Cambot during the KTMA era.

Cambot in the Season 1 intro.(This Cambot was made from the KTMA Gypsy puppet.)

Cambot in the Seasons 2-5 intros.

Cambot as seen in the seasons 5.5-6 intros. (This Cambot puppet would be used for the rest of the original run)

Cambot in the Season 7 intro.

Cambot during the Seasons 8-10 intros. 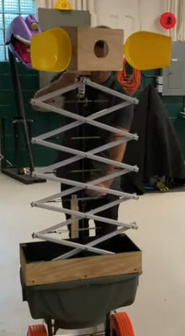 The new Bunraku performance of the Cheesy Movie Circus tour incorporates an actual camera into Cambot and for the first time, the robot can freely move around the stage.