Coleman C. Francis (1919-1973) was an American film director who has become known in recent years for the abysmal production quality of his three self-produced 1960s films. His trademark style included murky black & white scenes with poor acting, usually in desert locations, a preoccupation with light aircraft and parachuting, and coffee serving as a prop or a center of conversation. The plot often wandered inexplicably, to the point that some critics have suggested it represented an intentional artistic style.

Francis was born in Oklahoma in 1919. Sometime around the Great Depression, he moved to Texas, then in the 1940s headed for the bright lights of Hollywood. He worked on several films during the late 1940s and 1950s without credit: Blondie's Reward, Scarlet Angel, The Girl in White, This Island Earth, She Couldn't Say No, Twilight for the Gods, and P.J.. His first break came in 1958 in a credited role in Stakeout on Dope Street, where he played a detective. He went on to play minor parts in dozens of other films.

In 1961 he began writing, producing, and directing films with the help of pal Tony Cardoza, a welder by trade. Francis started with The Beast of Yucca Flats. He went on to direct, write, and produce two other movies, The Skydivers and Red Zone Cuba (Night Train to Mundo Fine). He appeared in Russ Meyer's 1965 film Motor Psycho, and his last work in the film industry was in 1970, when he played a drunk in Meyer's Beyond the Valley of the Dolls.

Francis was overweight (around 350lbs) and developed health problems. He died in California in 1973. Though arteriosclerosis is listed as the cause, Cardoza says his body was found in the back of a station wagon at the Vine Street Ranch Market with "a plastic bag over his head and a tube going into his mouth or around his throat." He is interred at the Columbarium of Remembrance in the Westwood Village Memorial Park Cemetery in Los Angeles.

Instead of fading into the annals of cinematographic history, his films gained cult status in 1994 after being featured on Mystery Science Theater 3000.

Francis is father of actors Alan Francis and Ronald Francis. [1]

Appearing in The Skydivers 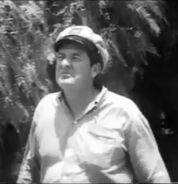 Appearing in The Beast of Yucca Flats

Appearing in This Island Earth