Conrad Brooks (1931-2017), born Conrad Biedrzycki, had a long career in films, appearing mostly in low-budget monster and science fiction movies. He was part of a stable of actors that frequently worked with director Ed Wood. He was also friends with actor Joe Estevez and they appeared in several of the same films.

Brooks had a cameo role as a bartender in the feature film Ed Wood, which dramatized the making of Glen or Glenda, Bride of the Monster, and Plan 9 from Outer Space. His younger self was played by actor Brent Hinkley in that film.

On the DVD release of Experiment #613 The Sinister Urge, Brooks made a special introduction for the film.

Appearing (standing, with switchblade) in The Sinister Urge

Appearing (on the left) in The Beast from Yucca Flats 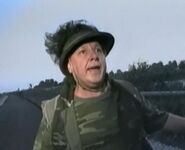