MST3K
Register
Don't have an account?
Sign In
Advertisement
in: MST3K Characters, Satellite of Love personnel, Characters played by Trace Beaulieu,
and 6 more

Crow T. Robot is one of the robotic companions built by Joel Robinson to help him stave off insanity while forced by the Mads to watch films as part of the Mystery Science Theater 3000 experiment. He is easy-going and naïve, yet prone to deliver the most sarcastic remarks. Crow's middle initial stands for "The", making his full name "Crow The Robot."

Crow, like his fellow robots Tom Servo, Gypsy, and Cambot, was built by Gizmonic Institute janitor Joel Robinson, who created them to help him withstand the torment of watching bad movies on the Satellite of Love, where Joel was trapped by mad scientists Dr. Clayton Forrester and Dr. Laurence Erhardt.

Once, Joel performed maintenance on Crow's RAM chips, and showed what he claimed was Crow's first memory. During the "memory", Joel explains that Crow's name is an acronym for "Cybernetic Remotely Operated Woman". Back in the present, Crow was shocked to discover that he's a woman, and instantly started worrying about the dishes and watching Thirtysomething. Joel chuckled and explained, "Take it easy, Crow. It's all just a real elaborate joke... I basically invented you to put that memory in and pull that joke on you." Crow calmed down, stating "So my life has been one big setup for a punchline? Boy, I feel like Morey Amsterdam."[1]

After Kinga Forrester and Max escaped from their trap, Jonah gave Crow an upgrade: the ability to blink.[2]

A duplicate of Crow was built for the Simulator of Love. This Crow has a more feminine voice, but otherwise seems to be identical to the Crow on the Satellite of Love.[3]

Crow is easy-going and quick-witted, but snarky and opinionated. He often delivers the most sarcastic remarks and is the most frequent quipper on the show. After the SOL crew's return from the edge of space, Crow was noticeably more irritable, caustic, and impatient with the movies than he previously had been, apparently as a result of being alone on the SOL for over five-hundred years while the rest of the crew was pure energy.

Crow describes himself as using cyber-based bubble memory, working off Unix and could use a variety of operating systems, underwent a complex personal evolution wherein painful confusion had given way to what he liked to think of as some degree of wisdom culminating in his current Zarasthustrian sense of self, often panics when making sandwiches, smells conspiracy in everything and doesn't know what he means most of the time.[4]

Crow is somewhat prone to injury, as he gets blown up, attacked, set on fire, or falls from great heights. He has also suffered bouts of vertigo, as he experienced nausea and dizziness from the unusual layout of the credits for Warrior of the Lost World[5] and Beginning of the End.[6]

His favorite condiment on a hot dog is relish.[7]At the conclusion of Experiment #324, Crow named Kafka's The Castle as his favorite movie, but it is unclear if he meant the 1964 Danish version or the 1968 West German version. This confuses Tom, who had thought that Crow's favorite movie was Zardoz.

Crow was identified on a Dungeons & Dragons Alignment Chart as the previously-unknown category Chaotic Chaos.

During Experiment #416, Crow acquired a double named "Timmy", to whom the crew quickly took a liking. However, the double began playing tricks on Tom Servo and Joel, who blamed Crow for the actions. He eventually joined them in the theater during the movie and attacked Tom, cocooning him in a matter identical to the xenomorph from Alien, forcing Joel and Crow to stuff him into an airlock and blast him out of the ship and into space.

Alone among the bots, Crow once conducted a mission to Deep 13. During Experiment #615, he slid down the Umbilicus in an attempt to bring the SOL back to Earth, but retreated back up to the satellite after being caught by Dr. Forrester, who then had Frank put a giant mousetrap beneath the Umbilicus—only to accidentally set off the trap on himself.

During Experiment #616, Crow was inspired by the short Are You Ready for Marriage? to ask Mike for Tom Servo's hand in marriage. During the wedding ceremony, everyone starts wrestling, prompting them all to forget the whole affair.

Crow once traveled to the past, attempting to prevent Mike from getting trapped working for the Mads, only to have to go back and stop himself in order to save Mike's life. Due to a time paradox, one of the Crows was evidently left behind and may still be living in Wisconsin, working at a cheese factory.[8]

The bots regard Joel as a father figure, while Mike was more of an older brother type. Crow stated that he did not dislike Jonah, but he (like Tom) was disinterested in Jonah's apparent death and the subsequent story of how he survived.

Pearl Forrester would often refer to Crow as "Art" and appeared to have closer relationship with him than would seem likely, as evidenced by his invitation to the Forrester Thanksgiving dinner alongside such guests as Mr. B. Natural, Pitch the Devil, and others.[9]

Crow's frame is made of advanced materials including molybdenum[10] (which is used for armor and aircraft parts and would have been found on a ship made by Gizmonics), and high-density Kevlar. On occasions when he has to wear formal attire (such as Joel's attempt at having a family photo), Crow has been known to have his net on backwards and upside down, to give the impression of slicked-back hair. He also occasionally inverts his net when donning some sort of head-gear, such as a helmet.

Crow has creative ambitions and has written several plays and/or screenplays, as well as producing several documentaries.

made from two incredibly rare Wallace Leisure Products "Alpha" or "Genie" fluorescent swing-arm type desk lamps with foam pipe insulation around the outer-parts of the lamp arm, and Italian Fanny Pinchers for hands.

During the KTMA season, he only had one floralier tray, his arms were made from PVC pipe with pipe insulation tied to the tray, and his eyes were glued to an entire Schwartz Bros. soap dish, which didn't include a separate eye movement mechanism, leaving them with a bulgier appearance. He is painted with Testors Gold Metalflake paint, which looks basically gold, and highlighted with flat black spray paint. in the KTMA season he is painted with cheap gold paint. Another version of Crow is used for the theater segments. This version is painted flat black and instead of Italian fanny pinchers for hands, he has claw parts from a Toysmith Robot Claw toy. This flat black version was also used as his Doppelganger "Timmy" in the Fire Maidens of Outer Space episode.

His appearance slightly changed over the series. In between the Comedy Central and Sci-Fi Channel episodes, his beak was a shorter "crown" style Empire Bowling pin (As Joel observed in Soultaker "You changed your bowling pin"), he became noticeably smaller and his eyes went from light pastel yellow to a luminescent neon yellow. Crow also has seldom-seen legs made from swing-arm type desk lamps and Toysmith robot claws or 1/2 inch 45 degree and elbow 1/2" CPVC couplings.

For Season 11, Crow's limbs and hands were changed. The arms and legs are now made from two desk lamps per limb while the hands are scaled up versions of the old ones. With the arms now utilizing control rods, Crow's arms are now articulated at the shoulders, elbow, and hands.

During shots of Crow where the legs are seen, they now use two desk lamps per leg, with the feet being filled in and scaled up versions of the hands. Crow now has a larger waist, being made from a cut floralier piece with tubing on top of it, attaching to the bottom of the lower floralier. The legs now also have knee caps cut from bowling pins.

For the Cheesy Movie Circus Tour, Crow's lower body was altered further. He could now freely move around the stage (which he did via unicycle and pogo stick) due to the bunraku style of puppetry. He was shown to have three prominent toes. During a scene in which Crow performed as a weight-lifter, his lower legs were a string of balls. A new ball-spring joint mechanism was built into his neck to allow him to look up and down.

As of 2022, Crow lost the ability to move the eyes in his soap dish. But now can blink.

The Soap Dish that was Vacuformed for Crow's Cowl

Many first-time viewers of the series are confused by Crow's appearance during the movie segments. Only the outline of his head can be seen, and (due to multistable perception) it can appear as if Crow is facing toward the viewer. Best Brains have compared this to a Necker Cube.

The evolution of the Crow T. Robot puppet. 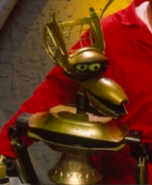 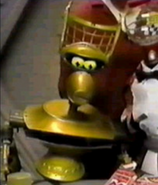 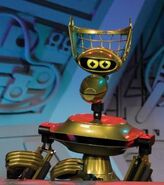