David Carradine (December 8, 1936 - June 3, 2009) was an accomplished actor and martial artist. He was the eldest son of screen legend John Carradine and was best known for his role as Kwai Chang Caine in the 1970s TV series Kung Fu, a role which he later reprised in the 1986 TV movie and the 1993 spin-off series Kung Fu: The Legend Continues...

Mr. Carradine's death was the result of autoerotic asphyxiation, and has subsequently become a frequently-used comedic reference (for example, in the RiffTrax of Batman's Last Chance when Kevin riffs "Can't a butler pull a Carradine in the broom closet in peace?"). 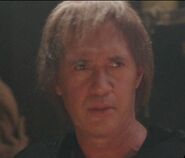 Appearing in Wizards of the Kingdom II

Appearing in Future Zone
Add a photo to this gallery
Retrieved from "https://mst3k.fandom.com/wiki/David_Carradine?oldid=49654"
Community content is available under CC-BY-SA unless otherwise noted.