Donald Bruce Stewart (1935-2006) was an American actor best known for his long-running role as attorney Mike Bauer on Guiding Light from 1968 to 1984, with a brief return appearance in 1997.

Although born in Staten Island, New York, Stewart spent his youth in Norfolk, Nebraska. He began acting at the age of seven, appearing in a number of westerns.

He served six years as a pilot in the United States Air Force. He also later served in the U.S. Navy and U.S. Naval Reserve.

Stewart studied opera in New York City and eventually became an understudy to Robert Goulet in the Broadway production of Camelot. After being cast as Mike Bauer on Guiding Light, Stewart continued to perform in musical theater and nightclubs. Prior to Guiding Light, he appeared on numerous episodes of the 1960s television series Dragnet.

After leaving Guiding Light, Stewart relocated to California, where he made guest appearances in a number of television series, including L.A. Law, Highway to Heaven, and Knots Landing. He also provided the voice of Clem in the 1991 film Rover Dangerfield. His final role was in a 2001 episode of JAG.

Stewart, a nonsmoker, died of lung cancer in Santa Barbara, California at age 70. He was survived by his second wife and two daughters from his first marriage. 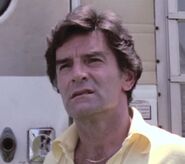 Appearing in Carnival Magic
Add a photo to this gallery
Retrieved from "https://mst3k.fandom.com/wiki/Don_Stewart?oldid=58752"
Community content is available under CC-BY-SA unless otherwise noted.