The door sequence happens whenever the Mystery Science Theater 3000 theme song ended, the movie sign flashed, or when Joel /Mike /Jonah, Crow T. Robot and Tom Servo leave the theater. During the sequence, Cambot would pass through the hexagon-shaped door in the hull of the SOL and pass through a hallway of oddly-shaped doors, which were often labeled 6-2 (though sometimes 5-2), similar to a countdown before movies that were stored on film. Originally, in the pilot episode, the doors were actually real doors that were filmed for a crude tunnel effect. In the pilot and KTMA season, none of the doors were labeled. The characters themselves do not go through the doors; they aparently go through secret hallways in the Sattelite of Love, hence Joel saying "We'll go around" in a few early KTMA episodes (although in Ring of Terror and the Season 2-5 intro theme, the Airlock was used by Joel to get to the theater, back when it was an alternate way of getting there).

On occasions (such as a time when Joel and the bots played a game of tag in Humanoid Woman and The Corpse Vanishes), the characters actually ran halfway down the tunnel and seem to always end up getting "run over" by Cambot (in actuality, they are running in place infront of the greenscreen, and it shows).

In Soultaker, Mike tries to open the door in the backdrop but has trouble opening it. By the time he gets it open, he begins running down the hallway and trips just as door 5 opens. 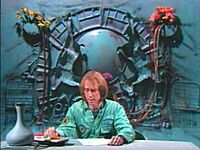 Backdrop for the pilot episode (with blue lighting). 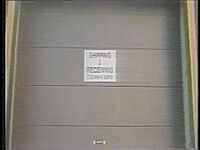 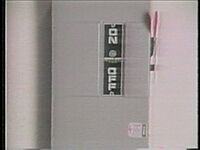 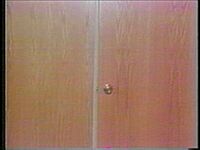 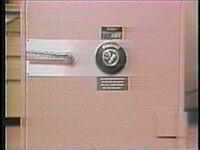 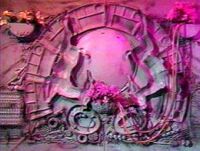 Backdrop for the KTMA series (with red lighting) 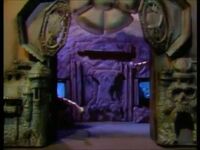 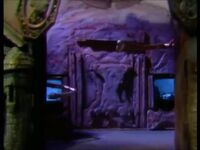 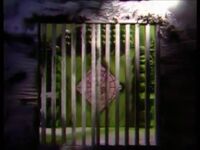 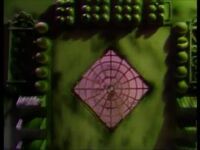 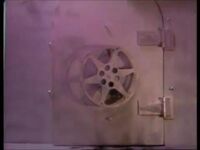 Bigger Version of the KTMA Backdrop (Click To Enlarge.)
Add a photo to this gallery

6. Blue door that flips up, away from the camera when opening, and down when closing

5. Green door that splits in half, with one half moving downward and the other going upward, and going into each other when closing

4. Yellow door that slides to the right when opening, and the left when closing.

3. Purple door with torches on either side, which slides down when opening, and up when closing.

2. Red fence that slides up when opening, and down when closing

1- A brown hatch that flips open to the left, leading to the theater when opening, and to the right when closing. 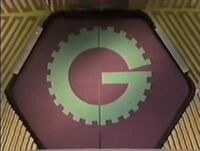 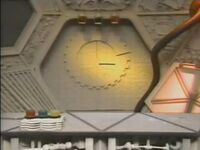 Later backdrop (Season 2 through half of 5).‎ 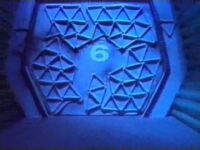 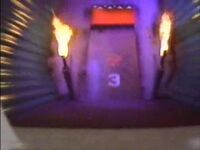 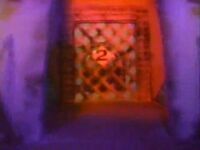 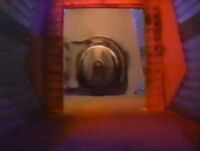 6. A pair of doors with circular windows that open away from the camera, and to the camera when closing. Note: This door also shows a mouse zipping by on the floor, both when opening and closing. From episode 812 onward, the sound effects when closing later changed.

5. Door opens with six triangular-shaped wedges moving away from the center when opening, and to each other when closing.

4. A drawbridge with red-colored lights on its backside that falls down when opening, and lifts up when closing.

3. A door with holes cut in it, pink lighting, and bubbles floating that opens by sliding up when opening, and sliding down when closing. If one looks closely it is possible to see the number 3 in bright pink.

2. A door decorated with various bones and skeletons and two screens showing a "Movie Countdown" that opens away from the camera when opening, and to the camera when closing

1- Grey hatch with the numbers 1-6 and a white tire around it that flips open to the right when opening, leading to the theater, and to the left when closing. 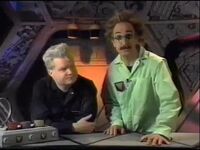 Alternate backdrop for Last of the Wild Horses (with the Mads on board). 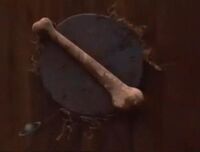 Alternate backdrop for Prince of Space.‎ 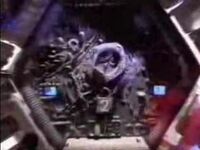 Alternate Season 8-10 Backdrop Angle.
Add a photo to this gallery

Note: In the movie, the full sequence is only played after the first Movie Sign, every time thereafter only shows doors two and one, and this sequence, due to it being a live action sequence, is never played in reverse order.

5. Hexagon-shaped door that is connected by a hexagon shaped latch in the middle

4. A giant blue brick wall that swings inward to the right

3. Gate that flips away from the camera to reveal a sudden blast of smoke

2. A door with TV's Frank's face on the right side, kept shut by a chain

1. Brown vault that clicks open to the right

6) A door that opens forming a laundry room

5) A door that opens forming a bathroom

4) A door that opens forming a kitchen

3) A door that opens forming a bedroom

1) A door that opens forming a garage

Retrieved from "https://mst3k.fandom.com/wiki/Door_sequence?oldid=47005"
Community content is available under CC-BY-SA unless otherwise noted.