Erin Gray is best known to audiences for her roles as Col. Wilma Deering in the 1979 film Buck Rogers in the 25th Century and the subsequent TV series, as well as Kate on the TV sitcom Silver Spoons.

Ms. Gray has had a long career in films and television. She had a recurring role as Madeleine Twain on the web series The Guild, which was created by and starred Felicia Day. She also appeared as Commodore Gray in the fan series Star Trek Continues. 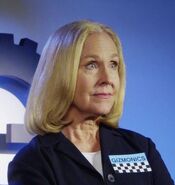 Appearing as Martha Masters in Experiment #1101 - Reptilicus
Add a photo to this gallery
Retrieved from "https://mst3k.fandom.com/wiki/Erin_Gray?oldid=61526"
Community content is available under CC-BY-SA unless otherwise noted.