Glenn Strange (1899–1973) was an American actor. He was of Irish and Cherokee descent and was a cousin of the Western film star Rex Allen. He stood 6 feet, 5 inches tall and weighed 220 pounds (at his peak).

Strange co-starred in westerns with John Wayne. He became well-known for replacing Boris Karloff as Frankenstein's Monster in three Universal Studios films in the 1940s. In the 1950s, he portrayed Lone Ranger nemesis Butch Cavendish opposite Clayton Moore in film and on television. He later had a recurring role on the long-running TV western Gunsmoke as Sam the bartender. His declining health forced him to leave the role in 1973.

Appearing in The Mad Monster 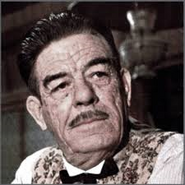 Glenn Strange as Sam on Gunsmoke
Add a photo to this gallery
Retrieved from "https://mst3k.fandom.com/wiki/Glenn_Strange?oldid=58754"
Community content is available under CC-BY-SA unless otherwise noted.