Jack Palance (1919-2006) was an American motion picture star who appeared in films such as Shane, Batman (with Jack Nicholson), City Slickers (for which he won an Oscar), Tango & Cash and God's Gun (with Lee Van Cleef). Born Volodymyr Palahniuk, he was distantly related to author Chuck Palahniuk.

He is referenced in Experiment #420, as there is an actor in the film that resembles him. 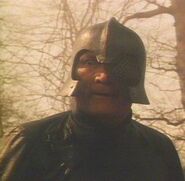 Appearing in Hawk the Slayer

Appearing in The Shape of Things to Come
Community content is available under CC-BY-SA unless otherwise noted.