He first appeared as a child actor in the films Oliver Twist and alongside Charlie Chaplin in The Kid (1921). As an adult, he is best known for his role as Uncle Fester on the original TV version of The Addams Family.

Coogan's mistreatment as a child actor inspired many of the current laws in America that govern how child actors must be paid and educated.

Appearing in The Space Children 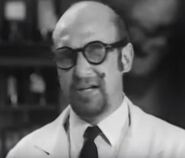 Appearing in Mesa of Lost Women
Add a photo to this gallery
Retrieved from "https://mst3k.fandom.com/wiki/Jackie_Coogan?oldid=58425"
Community content is available under CC-BY-SA unless otherwise noted.