In August 2012, Van Damme make a theatrical comeback by appearing as the lead villain in The Expendables 2 (with Sylvester Stallone, Arnold Schwarzenegger and Bruce Willis). On November 14 of 2013, Van Damme appeared in an ad for Volvo Truck company where he was shown standing between two Volvo trucks supporting only by his feet.

He was mentioned during one of the riffs for Experiment 320 when Crow T. Robot exclaims: "Van Damme AND Van Damme IN Van Damme Yankees!" which parodies the promotional material for the 1991 film Double Impact, in which he portrayed identical twin brothers. He was also mentioned repeatedly in Experiment 1004 due to lead star Daniel Bernhardt's resemblance to the actor. 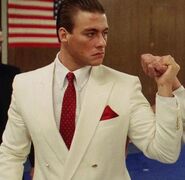 Appearing in No Retreat, No Surrender
Community content is available under CC-BY-SA unless otherwise noted.
Advertisement