Regular
Joel Robinson is an inventor and former janitor at Gizmonic Institute. He was kidnapped by Dr. Clayton Forrester and Dr. Laurence Erhardt and became the first test subject in the "Mystery Science Theater 3000" experiment they instigated.

Little is known about Joel's life before Gizmonic Institute. He played piano in the second grade, performing in a piano recital captured in home movies shot by his Uncle Roy. He has (or had) relatives (of uncertain relationship) named Brian and Bridget, their children Brett and Brenda, also Minnie and her children Ray, Tony and Theresa.[1]

During Experiment #313, Joel indicated that he attended Ashwaubenon High School (the alma mater of Joel Hodgson), and correctly identified their sports team as the Jaguars. This would imply that Joel spent part of his youth living in Wisconsin.

At one point he describes himself as being "from the Humanities", but it is unclear if this is an indication that he studied that field.

Eventually, Joel came to work at Gizmonic Institute as a janitor. At Gizmonic, he was able to indulge in his penchant for inventions, an activity that would come in useful after he became stranded on the Satellite of Love.

Gizmonic employees Dr. Clayton Forrester and Dr. Laurence Erhardt ("the Mads") kidnapped Joel and shot him in a rocket onto the Satellite of Love (a spacecraft in Geo-synchronous orbit around the Earth) as part of an experiment to determine which bad movies were capable of destroying the human mind. Joel was chosen because Forrester and Erhardt despised him for some reason, even though he was by all accounts a competent employee. It was implied that the Mads were envious of Joel's creativity and inventiveness.

The experiment required Joel, upon receiving "Movie sign", to enter the Mystery Science Theater, a built-in movie theater, and watch "cheesy movies" sent to the theater by the Mads. By choosing the "worst they could find", the scientists hoped to find the perfect movie to break Joel's will and then use it to take over the world.

Left alone on board the ship, Joel scavenged parts from the control systems to build companions to help him cope with his predicament. His initial robots were Gypsy, Crow T. Robot and Beeper. He would later build Tom Servo (apparently from the same shell as Beeper), Cambot (incorporating the camera used to communicate with the Mads) and Magic Voice.

As part of the normal rituals fostered at Gizmonic Institute, Joel (and sometimes the bots) participated in an "Invention Exchange" with the Mads, an informal contest to see who could come up with the better invention.

As their creator, Joel serves as a father figure to Tom, Crow and Gypsy and he often scolded them when their antics got out of hand, or when they made crude jokes during the films. In a display of parental concern, he opened an umbrella during Experiment 403 to cover some nudity.

Though bombarded with dozens of horrible films, he tended to take his captivity in stride, delivering most of his riffs in a deadpan voice and holding little ill will towards his captors. Joel jokingly referred to them as "the Mads" (among other nicknames) while referring to elements of popular culture ("Auntie Em and Toto") or things found in Minnesota ("Milavetz and Associates", a prominent Twin Cities-area law firm).

Joel spent five and a half years aboard the SOL, finally managing to escape after a torturous viewing of the Joe Don Baker film Mitchell. While Joel, Tom, and Crow were off in another part of the ship on a camping trip, Gypsy overheard the Mads plotting to fire their new temp worker, Mike Nelson, and thought that they meant to murder Joel instead. To save his life, she found a spare escape pod, the Deus ex Machina, hidden in the SOL's cargo bay, and used it to launch Joel back to Earth. Furious, Dr. Forrester decided not to kill Mike, and instead "conked him on the noggin" and shot him up to the satellite as Joel's replacement.

During his initial time aboard the Satellite of Love, Joel was subjected to 106 experiments.

Joel crash-landed in the Australian outback, and spent a few years traveling and doing freelance "pyrotechniques" for the band Man or Astro-man?. Later, he worked at a Hot Fish Shop in Osseo, Minnesota.

At some point, Joel learned that Dr. Forrester had rigged most of the SOL's components to self-destruct after ten years, so he constrcuted a spaceship to go back and repair the ship. Joel entered tractor range of the SOL during Experiment #1001, and was reunited with the bots. It was during this visit that he met Mike for the first time. Though Mike and the bots asked if he could take them back to Earth with him, Joel declined. He explained that the years he spent on the Satellite of Love were the best years of his life, and told Mike "it made a man out of me and maybe, just maybe, it'll make a man out of you, too." Once the repairs were finished, Joel boarded his ship and returned to Earth.

Return to the experiment

Many years later, Joel found himself caught up once again in the "Mystery Science Theater 3000" experiment. He was forced to go on tour alongside then-current test subject Jonah Heston, watching the films The Brain and Deathstalker II. Later, he toured again on his own, this time watching the films No Retreat, No Surrender and Circus of Horrors.

After Kinga Forrester started the Gizmoplex, she was told by her financier Dr. Kabahl that she should bring one of the old hosts back for new experiments. Dr. Erhardt agreed to use his spaceship The Pretty Lady to travel through the Time Bag and fetch a host. He brought a version of the Satellite of Love from the year 3000 that was manned by Joel Robinson. Robinson's 'Bots were on a spacewalk at the time that he was taken, so he was joined by the versions of Tom, Crow, and Gypsy (GPC2) from the Simulator of Love for his experiment. Joel reverted Tom Servo's voice to its original setting partway through Experiment #1306.

This version of Joel was fairly mellow, and he displayed no animosity towards Dr. Erhardt, Kinga, or Pearl Forrester. He wears a red jumpsuit (occasionally with a vest), round eyeglasses, and has a moustache and beard that is grey on his chin.

Joel with the Bots 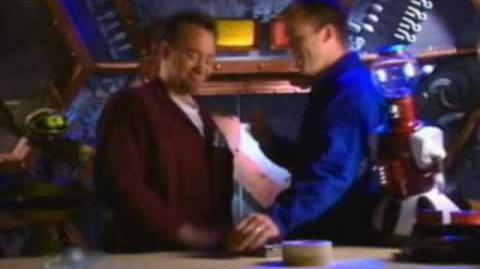 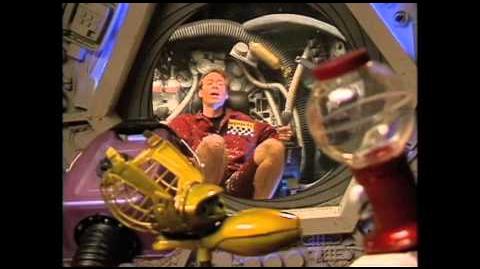 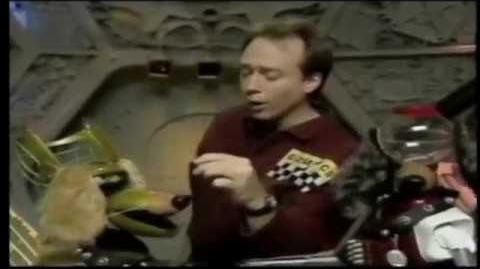 Wikipedia has an article related to:
Joel_Robinson
Community content is available under CC-BY-SA unless otherwise noted.
Advertisement