In addition to his many film credits, Hoyt was featured in the Star Trek pilot episode "The Cage" as Dr. Phil Boyce. He enjoyed success later in life in the role of Grandpa Stanley Kinisky on the TV series Gimme a Break!.

Appearing in The Time Travelers 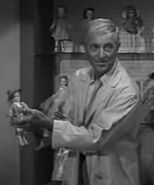 Appearing in Attack of the Puppet People
Add a photo to this gallery
Retrieved from "https://mst3k.fandom.com/wiki/John_Hoyt?oldid=56885"
Community content is available under CC-BY-SA unless otherwise noted.