Kim Cattrall (born 1956) is a British-Canadian actress best known for her role as Samantha on the HBO television series Sex and the City (and the subsequent films). She also appeared in many movies including Porky's, Police Academy and Mannequin.

During Experiment #403 - City Limits, Crow T. Robot became enamored of Cattrall, penning and performing the song "Oh, Kim Cattrall" in her honor (though he would later express a similar attraction to Estelle Winwood, and Mrs. Hargrove from Experiment #905).

When Dr. Laurence Erhardt made a surprise visit to Moon 13 during Experiment #1204 - The Day Time Ended, he revealed to Kinga Forrester that he believes that Kim Cattrall is her mother. Kinga's father, Dr. Clayton Forrester, had apparently tried to persuade Cattrall to give up show business and join him in mad science, but Kim could not be convinced. 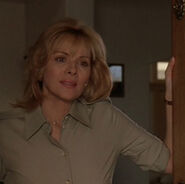 Appearing in Star Trek VI: The Undiscovered Country
Add a photo to this gallery
Retrieved from "https://mst3k.fandom.com/wiki/Kim_Cattrall?oldid=52501"
Community content is available under CC-BY-SA unless otherwise noted.