Leonardo da Vinci was a famous artist, inventor and scientist.

Da Vinci appeared as a featured character in the film Quest of the Delta Knights, played by actor David Kriegel. He was a young, struggling artist who became inspired by his discoveries in the cave of Archimedes at the end of the film.

"Leonardo Da Vinci" visited the SOL and communicated with Mike and the 'Bots via the Hexfield Viewscreen during Experiment #913. He expressed his displeasure with how he was portrayed in the movie, claiming that "I'm not a mook like this guy". He stated that he had emigrated to the United States in the early 20th Century and is living in Queens. He became annoyed with Servo when the robot asked too many questions about his life and activities. 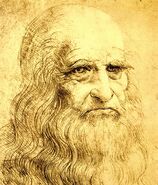