Les Podewell (1907-1998) was an American actor. He was sometimes credited as "Lester Podewell".

Les Podewell was married to actress Beverly Ruth Younger. They had 4 children, including Bruce Podewell with whom they appeared (as son and parents) in the short Mr. B Natural.

Les was the grandfather of actress Cathy Podwell, who was a series regular on the TV drama Dallas and who co-starred in the cult favorite horror film Night of the Demons.

Appearing (right) in Mr. B Natural 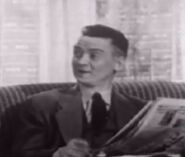 Appearing in Are You Popular?
Add a photo to this gallery
Retrieved from "https://mst3k.fandom.com/wiki/Les_Podewell?oldid=52145"
Community content is available under CC-BY-SA unless otherwise noted.