The following is a series of lists detailing all commercial Blu-ray releases of Mystery Science Theater 3000 and related spin-off productions.

Beginning in 2015, Shout! Factory occasionally includes MST3K episodes as an extra on Blu-ray releases of the films featured.

The first (and, for quite a while, only) straightforward MST3K Blu-ray released was Mystery Science Theater 3000: The Movie.

In 2005, Mike Nelson and Legend launched RiffTrax, an online service where Mike (and, eventually guests) would riff various films, releasing only an .mp3 of the riff, thereby circumventing the need to license the films or limit themselves to public domain features. Blu-ray releases of certain live theatrical broadcasts were launched in 2011.

The Blu-ray/DVD/Digital copy release of the 2013 comedy film The Heat features a commentary/riff by Joel Hodgson, Trace Beaulieu and Josh Weinstein. It was released by 20th Century Fox Home Entertainment on October 15, 2013.

The Blu-ray release of the Stephen King-written-and-directed 1986 film Maximum Overdrive (based on his own short story "Trucks") features a commentary by "Actor and Comedian Jonah Ray and Blumhouse Film Executive Ryan Turek". It was released on Oct 23, 2018 by Lionsgate under their Vestron Video label. 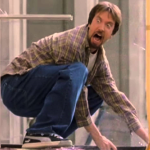