Lon Chaney Jr. (1906-1973) was an American actor. He was the son of silent film star Lon Chaney. He is probably best-known for his portrayal of Larry Talbot - The Wolf Man - in a number of films for Universal.

Lon Chaney Jr. had a long career in films and television, appearing mostly in Westerns and monster movies. He passed away in 1973 (age 67). His cause of death is given in various places as heart failure, liver failure, and beriberi.

Appearing in The Indestructible Man

Appearing (left) in The Undersea Kingdom, Chapter 1 from Attack of the Giant Leeches 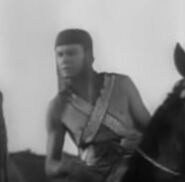 Appearing in The Undersea Kingdom, Chapter 2 from The Indestructible Man 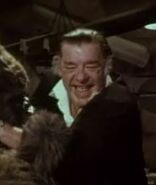 Appearing in Hillbillys in a Haunted House

Appearing in Bride of the Gorilla
Add a photo to this gallery
Retrieved from "https://mst3k.fandom.com/wiki/Lon_Chaney_Jr.?oldid=58412"
Community content is available under CC-BY-SA unless otherwise noted.