Danish miners Svend Viltorft dig up a section of a giant reptile's tail from the frozen grounds in Lapland, where they are drilling. The section is flown to the Danish Aquarium in Copenhagen, where it is preserved in a cold room for scientific study. But due to careless mishandling, the room is left open and the section begins to thaw, only for scientists to find that it is starting to regenerate.

Professor Otto Martens, who is in charge of the Aquarium, dubs the reptilian species "Reptilicus" (upon a reporter's suggestion) and compares its regeneration abilities to that of other animals like earthworms and starfish.

Once fully regenerated from the tail section, Reptilicus goes on an unstoppable rampage from the Danish countryside to the panic-stricken streets of Copenhagen (including one of its famous landmarks, Langebro Bridge), before finally being killed with poison by ingenious scientists and military officers.

However, the monster's foot is not destroyed and sinks to the bottom of the sea. The movie is left open-ended, with the possibility that the foot could regenerate.

Prologue: Jonah Heston, on his way to the Gizmonic Institute with a load of valuable ore rich meteors, receives a distress signal from Moon 13 and lands on the moon to help. The signal is actually a ruse by Kinga Forrester, who captures Jonah and forces him to watch cheesy movies.

Segment One: Jonah shows off some upgrades he has made in the two months since being trapped on the Satellite of Love. He's given Tom Servo the ability to fly and re-routed Gypsy so her coils don't get in the way, while also upgrading her voice. Kinga Forrester and her henchman Max (who prefers being known as "TV's Son of TV's Frank") are restarting the experiment so Kinga can "sell it to Disney for a billion dollars". Jonah checks the user's manual and sees he should do an Invention Exchange, so he shows off a fan for blowing bubbles. Kinga's got nothing but the "star power" of this week's movie, Reptilicus.

Segment Two: The bots are confused by the concept of a Danish giant monster, so Jonah raps "Every Country Has a Monster" with the bots.

Bumper: "To Earth" w/ a description of the Door sequence

Segment Three: Crow takes Tom's arm and uses it to regenerate Tom several times. Genetic mutations appear almost immediately with "Melodramatic Southern Belle Servo" and "Evil Servo" making an appearance. Crow calls all the duplicate Servos back, but one of the copies is the one that stays behind.

Segment Four: Jonah reads some letters from fans. The first asks if Crow ever hurts Jonah's feelings, but the bots' sarcasm seems to have no effect. The second shows off a young child's drawing and his math skills, which throws the bots somewhat.

Segment Five: Jonah has created a cardboard city for Gypsy (with cardboard "Reptilicus" wings and claws) to destroy. Kinga vows to continue until "solid gold ratings come raining down" (despite, as Max points out, Netflix not having ratings). She shuts him up, then orders him to push the button.

Stinger: Petersen sticks his hand in a tank with electric eels and comedically gets electrocuted.

"He tampered in God's domain."

In Hollywood in the '50s, writers, directors, actors, and others who had been—or even accused of being—members of the Communist Party were "blacklisted" and banned from working on films. "Pinko" is an old insulting term for a Communist, or at least someone whose politics were seen as sympathetic to Communism.

This is the name of a long-running Canadian sketch comedy television series for children. It became a programming staple in the early days of the American cable TV network Nickelodeon (which was also geared towards young viewers). One of the running gags on the show was that characters would have green "slime" dropped on them when they said the phrase "I don't know". Though the show has long since gone off the air, green slime and the practice of "sliming" people remain present on the network, and it is featured at the annual Kid's Choice Awards (per a subsequent riff).

The babysitter and the man upstairs is an urban legend that dates back to the 1960s about a teenage girl babysitting children who is harassed by a series of anonymous telephone calls wherein she is told to "check the children." She eventually calls the police, and, after tracing the next call, they tell her, "The calls are coming from inside the house."

Squirmles, also known as Magic Twisty Worms, are fuzzy, googly-eyed worm toys that were popular in the 1970s. An "invisible" string is attached to the squirmle, making it possible to do magic tricks with it, such as pulling it along and making it look as if the worm is cralling across one's hand and in-between the fingers. The squirmles come in different colors and can be found at discount stores.

A popular anime about a whole group of planet-named heroines. A lady in the movie has a white outfit with a large bow on the chest, like the Sailors' uniforms.

Said over a shot of broken eyeglasses. Possibly a reference to the Twilight Zone episode "Time Enough at Last" (which was the actual line) or to the ending of the film On Her Majesty's Secret Service, where James Bond's wife, Tracey, is seen dead through a shattered windshield and he states to police that she is just sleeping and that they have "all the time in the world".

From "Every Country Has a Monster". Originally a lyric from the song "One Week" by Barenaked Ladies. It's also known for being the basis of an online phone prank.

Morgan Freeman portrayed God in the 2003 comedy Bruce Almighty, as well as its sequel Evan Almighty. 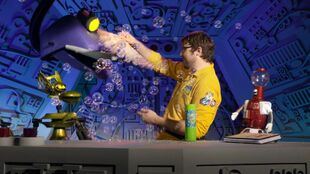 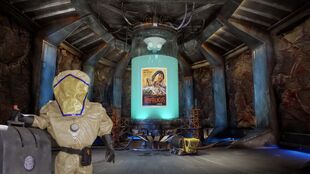 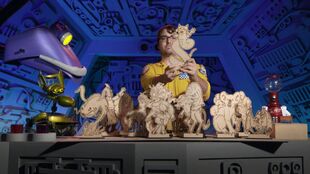 Every Country Has a Monster. 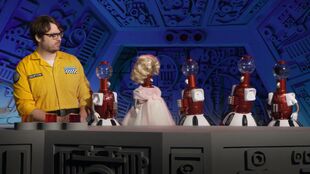 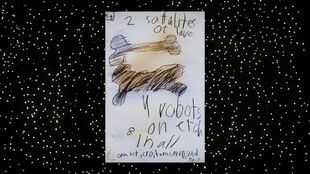 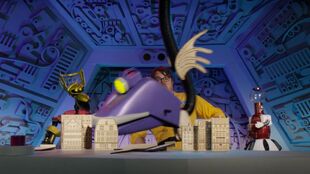 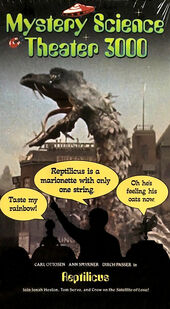 Only use this section if you have actual references.[1]