Recurring
Mega-Synthia is a clone that combines the DNA of Pearl Forrester and Synthia (herself a clone of Pearl Forrester). She has blonde hair that she often wears in an unkempt bun, and wears a green outfit similar to Pearl and Synthia's. She also has a pierced right nostril in which she sometimes wears a ring or a stud.

Mega-Synthia and Synthia both appeared in a Zoom meeting during Turkey Day '20, during which they tormented Emily Crenshaw, Tom Servo, Crow, and Jonah Heston (briefly). She affectionately addressed Synthia as her "clone-sister-mother" and the two of them seemed to enjoy berating the others.

Mega-Synthia (still played by Yvonne Freese) also appears in promotional bumpers for the MST3K channel on the streaming service Pluto TV. In one of these, she gleefully "denies" that the channel is a covert brain-washing effort. 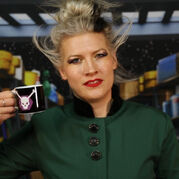 Add a photo to this gallery
Retrieved from "https://mst3k.fandom.com/wiki/Mega-Synthia?oldid=63819"
Community content is available under CC-BY-SA unless otherwise noted.