New Petitions Against Tax is a subheadline that appears in prop newspapers in many old films, often accompanied by "Building Code Under Fire," and at least twice by "Increase in Commuter Fares Denied." These headlines serve as unremarkable filler, so as not to attract attention away from the screaming, plot-related main headline.

Still, the same phrases appearing again and again in different movies lend them a kind of mystique. They've appeared in many Mystery Science Theater 3000 episodes, and are occasionally referenced by Joel, Mike, Tom and Crow. It first appears in the first Commando Cody short.

First Appearance in Radar Men from the Moon, Chapter One (with The Robot vs the Aztec Mummy Episode 102)

Bride of the Monster
Episode 423

Revenge of the Creature
Episode 801

I Was a Teenage Werewolf
Episode 809
Tom coos, "Oh, that poor building code..."

Killers from Space
The Film Crew 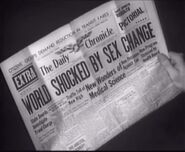 Glen or Glenda
The Mads Are Back

"Building Code Under Fire" often appears with "New Petitions Against Tax", but it's also made some solo appearances.