Initially appearing on the stage, Ms. Converse later had a career in films and television that extended over 40 years. Her final film role was in 1988's The Accidental Tourist.

Her pronunciation of the word "treasure" (as TRAY-zhur) in Experiment #805 was a source of delight for Mike and the Bots.

Appearing (center) in The Brute Man 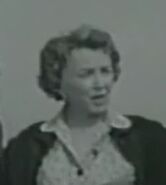 Appearing in The Thing That Couldn't Die
Add a photo to this gallery
Retrieved from "https://mst3k.fandom.com/wiki/Peggy_Converse?oldid=48579"
Community content is available under CC-BY-SA unless otherwise noted.