Joseph Peter Breck (March 13, 1929 - February 6, 2012) was an American actor. He was best-known for his role of Nick Barkley on the television series The Big Valley.

In June 2010, Breck's wife Diane announced on his website that the actor had been suffering from dementia and could no longer sign autographs for fans, although she said that he still read and enjoyed their letters. Despite this diagnosis, she said he was still physically healthy and did not require medication. Thereafter, Diane Breck reported that her husband was hospitalized on January 10, 2012. On February 6, 2012, Peter Breck died from his illness at the age of eighty-two. 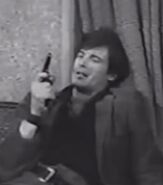 Appearing in The Beatniks

Appearing in The Sword and the Sorcerer
Add a photo to this gallery
Retrieved from "https://mst3k.fandom.com/wiki/Peter_Breck?oldid=54983"
Community content is available under CC-BY-SA unless otherwise noted.