Mr. Cushing appeared in many of the highly-regarded Hammer Horror films with Christopher Lee and John Carradine.

Mr. Cushing played the Doctor in the two Doctor Who feature films produced during the 1960s.

In 2016, a computer-generated simulation of Mr. Cushing's features (with voice and body provided by actor Guy Henry) appeared in the film Rogue One: A Star Wars Story. This film became a RiffTrax presentation in 2017.

Appearing in At the Earth's Core 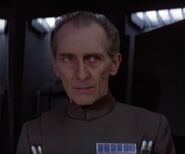 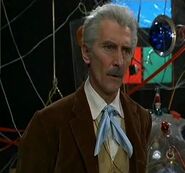 Appearing in Doctor Who and the Daleks 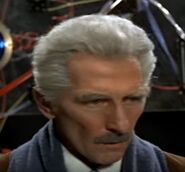 Appearing in Daleks' Invasion Earth 2150 A.D.
Add a photo to this gallery
Retrieved from "https://mst3k.fandom.com/wiki/Peter_Cushing?oldid=62561"
Community content is available under CC-BY-SA unless otherwise noted.