MST3K
Register
Don't have an account?
Sign In
Advertisement
in: RiffTrax, Other works by MST3K cast & crew, Shows similar to MST3K, Companies

RiffTrax is riffing project started by Michael J. Nelson and Legend Films in 2006 as "Mike Nelson's RiffTrax". Initially, it focused on downloadable commentaries distributed in mp3 file format to be played in-sync with the movie being watched. Originally showcasing only Mike, he was later joined by MST3K alumni such as Kevin Murphy and Bill Corbett, as well as other noted internet personalities. As of 2021, full RiffTrax commentaries always feature Mike, Kevin and Bill.

In 2004, five years after MST3K ended its run, Mike Nelson began providing humorous commentaries for DVD releases by Legend Films. Six of these were released before the founding of RiffTrax in 2006, with an additional title (the Three Stooges in Swing Parade) being released afterwards.

In 2009, Legend began releasing DVDs with the RiffTrax commentaries already included and the ability to watch with or without the commentary. Early releases in this series featured "three-riffer" versions of the films Mike had already riffed solo.

In 2012 Nelson and other RiffTrax personnel bought RiffTrax from Legend, taking the company completely independent.

RiffTrax audio files are released in mp3 format. In the early years, viewers had to sync the film to the audio themselves. Audio checkpoints were provided by DisembAudio to help re-sync if the viewer gets out of step.

After several years of providing MP3 commentary riffs of mainstream features, RiffTrax began producing pre-packaged features where the commentary and movie are synchronized together for purchase (similar to MST3k, but without silhouettes on the screen or host segments). Though physical media is still available in many cases, the majority of RiffTrax's On Demand work is download-only, available in most of the currently accepted video formats.  During the time RiffTrax was owned by Legend, they would provide the licensing allowing the releases.

In 2017, RiffTrax made some of their material (films, shorts, and clips collections) available on the streaming service pluto.tv, which is free to watch and shows the RiffTrax with commercial interruptions. The Rifftrax are shown on a schedule and are not available to view on demand or download. Pluto.tv also has a dedicated MST3K channel. Some RiffTrax material is also available to stream for free at shoutfactorytv.com and tubitv.com.

Starting in 2009, Mike, Kevin, and Bill began performing RiffTrax Live, simulcasting the performances to theaters across the country via Fathom Events. Most of these have been released via VOD, with several also available on DVD and/or Blu-ray. RiffTrax Live has also performed several evenings of short films with guest riffers, including those from the RiffTrax Presents series (see below). The 2016 MST3K Reunion Show was one of these presentations.

In 2014, Michael J. Nelson, Kevin Murphy and Bill Corbett produced Total Riff Off for the National Geographic Channel. In this show, they riffed on material from several National Geographic Channel series. Total Riff Off premiered on April 1, 2014 with three episodes in a row, each an hour in length with commercials included. Another series of three was broadcast on December 16, 2014.

In June 2015, MST alums Bridget Nelson and Mary Jo Pehl teamed up for a new series of shorts and (eventually) feature films. These are branded as "RiffTrax Presents", and are considered a separate series from those riffs.

RiffTrax also provides the ability for anyone to produce and publish their own riff commentary of a film on the website (called "iRiffs").  Money can be charged for these commentaries as well, a percentage of which goes to RiffTrax with the rest going to the content creator.  Video on demand features are also now allowed as part of iRiffs. 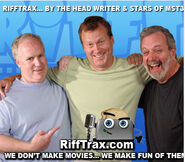 Earlier in 2014, Bill, Kevin and Mike had a 20th Century Fox-esque version of their logo present on their Facebook/Twitter accounts

The entire crew
Community content is available under CC-BY-SA unless otherwise noted.
Advertisement