Robert Easton (1930-2011) was a working actor and dialog coach in Hollywood for over 50 years. He was particularly well known for his vocal talents and was often called "The Man of a Thousand Voices". In his later years he was a highly sought after dialog and accent coach, gaining the nickname of the “Henry Higgins of Hollywood”. He worked with thousands of actors including major stars including John Travolta and Forest Whitaker.

Easton also studied words and stories throughout his life, leaving behind a collection of over 100,000 books about language and dialect collected from throughout the world.

Robert Easton's​ character from Invaders from the Deep.

Appearing in The Giant Spider Invasion.

Robert Easton in The Touch of Satan. 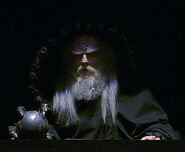 Appearing in Star Trek VI.
Add a photo to this gallery

Retrieved from "https://mst3k.fandom.com/wiki/Robert_Easton?oldid=62550"
Community content is available under CC-BY-SA unless otherwise noted.