Roddy McDowall (1928–1998) was a British actor and photographer best known for the Planet of the Apes film series, How Green Was My Valley, My Friend Flicka, Lassie Come Home, and Fright Night.

Mr. McDowall worked consistently throughout his life, and later provided voices for many animated projects including Batman: The Animated Series, The Tick, Pinky & the Brain (where he had a recurring role as Brain's malicious rival Snowball), and A Bug's Life.

Following his death, McDowall's home in California was purchased by comedian Dana Gould. 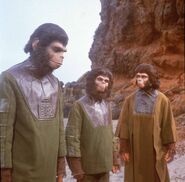 Appearing (left) in Planet of the Apes