Steve Franken (1932-2012) was an American actor. He was sometimes credited as Steven Franken or Stephen Franken.

Franken appeared in the highly-regarded sci-fi film Westworld, and had a recurring role on the TV series The Many Loves of Dobie Gillis as Dobie's frequent nemesis Chatsworth Osbourne Jr.

Appearing in Stranded in Space

Appearing in The Time Travelers 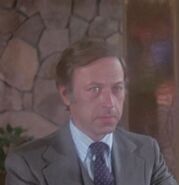 Appearing in Avalanche
Add a photo to this gallery
Retrieved from "https://mst3k.fandom.com/wiki/Steve_Franken?oldid=43575"
Community content is available under CC-BY-SA unless otherwise noted.