TFC - The Giant of Marathon

Stephen L. Reeves (1926-2000) was an American bodybuilder and actor. At the peak of his career, he was the highest-paid actor in Europe.

Reeves' first film was Ed Wood’s Jailbait, but he is best known for his Italian sword-and-sandal epics, particularly his performances as Hercules. Later in his career, Reeves turned down $100,000 to star as James Bond in Dr. No, the first film in the Bond franchise. The role went to Sean Connery, who became an international star.

Reeves spent the later years of his life promoting drug-free bodybuilding. He died in 2000, at the age of 74.

"Steve Reeves" appeared in Deep 13 during Experiment #408 - Hercules Unchained. He was played by Michael J. Nelson. 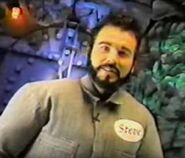 Michael J. Nelson as Steve Reeves
Add a photo to this gallery
Retrieved from "https://mst3k.fandom.com/wiki/Steve_Reeves?oldid=58696"
Community content is available under CC-BY-SA unless otherwise noted.