TV's Frank, played by Frank Conniff, is one of the Mads, Dr. Clayton Forrester's lab assistant. He appears at the beginning of Season 2, with the departure of Forrester's fellow scientist Dr. Laurence Erhardt, and continues through Season 6. According to The Mystery Science Theater 3000 Amazing Colossal Episode Guide, Dr. Forrester discovered Frank working at a nearby Arby's. Early on he was simply called Frank; later he acquired the more ostentatious name which is a reference to how a TV personality would sometimes be introduced as "TV's so-and-so" on talk shows and other programming. [1] Frank wears a black uniform and his hairstyle includes a spit-curl (one episode featured Frank shaving his head with only his spit-curl remaining).

Little is known about Frank's past save that he attended Harriet Tubman High School (a real high school in California), where he was held back at least twice. While working at Arby's, Frank was allegedly nicknamed "Zeppo" due to his supposed lack of a sense of humor. Frank had a surprisingly large personal fortune which surfaced whenever a large amount of money was required for a particular segment.

TV's Frank is apparently the father (or source of some of the genetic material) of Kinga Forrester's assistant Max, who likes to call himself "TV's Son of TV's Frank". This seems to have been confirmed by Dr. Erhardt in Season 12.

TV's Frank's first MST3K episode was episode #201 Rocketship X-M, where, apparently still in his Arby's mindset, he took fast-food orders and (to Dr. Forrester's annoyance) almost brought the Satellite of Love down so the crew could "dine in." His last regular appearance was episode #624 Samson vs. the Vampire Women, during which he was assumed into "Second Banana Heaven" by the angel Torgo. After his departure, he was immortalized in the following year's Mystery Science Theater 3000: The Movie as a door handle on the way to the theater.

Prior to his ascension, Frank had invited several people to Thanksgiving dinner at Deep 13 without telling Dr. Forrester. Their unexpected arrival annoyed Clayton and he yelled out Frank's name in frustration.

Frank also made a guest appearance in the Season 10 opener Soultaker, having gotten a job in the afterlife as a Soultaker after complaining that Second-Banana Heaven was "too political" and that Pat Buttram "had it in" for him. (This episode also features a cameo by Joel Hodgson, the show's creator, who played SOL resident Joel Robinson for the show's first six years.) In this appearance, he took the soul of Bobo and played ring toss with it in Castle Forrester, and he seemed to want Joel's as well (though it's unclear as to whether or not he managed to get it in the end). He is also mentioned in episode #822: Overdrawn at the Memory Bank; as the Novacorp chairman, a.k.a. "Fat Man" appears during the opening credits, Mike says, "Wow! TV's Frank! Hi, Frank!" Servo adding, "He's come up in the world!"

Though his ascent to Second Banana Heaven apparently left no trace of Frank, he did leave some earthly remains behind including a spare head that Dr. Forrester kept in a box (see Experiment #706). Years later, Frank's predecessor Dr. Erhardt acquired Frank's remains from the Gizmonic Institute and prepared to scatter them along with Dr. Forrester's.

During TV's Frank's tenure, the catchphrase "Push the Button, Frank!" was a staple of most shows and the last thing heard before the credits would roll.

Frank usually serves as a foil to his evil boss, Dr. Forrester, and is frequently on the receiving end of many of Forrester's experiments or punishments. He is subjected to many painful deaths but always returns alive and well shortly afterwards; whether this rapid recovery is a quality bestowed upon him by Dr. Forrester or a talent that Frank always possessed (making him uniquely qualified as a mad scientist's guinea pig) was never explained, since it was, after all, "just a show." In #506 Eegah it's revealed that Frank's blood was a previously unknown type when Dr. F replaced it with radiator fluid. Occasionally, however, Frank gets revenge on his taskmaster by directly or indirectly causing Forrester harm. One significant example of sidekick payback occurs in episode #619 Red Zone Cuba, when Frank, supposedly owing the mob "50 large", passes Forrester off as himself, earning the evil scientist two severe beatings and an episode-long stint in full-body bandages.

Frank participates in the weekly invention exchanges that are primarily a feature of the Joel Robinson years. His first invention was a rip-off of Joel's invention, the BGC-1.9 drum machine. He repeated his thievery by introducing the "Cheese Phone", which Joel had supposedly recorded in his notes from the '70s. Unlike Forrester (who rarely even remembered Crow and Servo's names), Frank took a liking to Joel (and later Mike) and the 'Bots, who reciprocated his friendship.

In Season 6, Dr. Forrester discovers that his mother, Mrs. Pearl Forrester, has had a strong friendship with TV's Frank that he'd been unaware of. When she comes to visit, she winds up spending all her time with Frank and neglecting her son, suggesting some of the formative influences that made Dr. Forrester an evil scientist.

In Samson vs. the Vampire Women, Frank reads a fortune cookie that hints at his imminent death. Soon after, Torgo appears and takes Frank to Second Banana Heaven. He briefly returns as a ghost at the end of the episode to visit Dr. Forrester and push the button one last time.

Little else is known about Frank's background.  It's revealed in Experiment #317 Viking Women and the Sea Serpent that Frank had recently become a vegetarian.  Later, in Experiment #624 Samson vs. the Vampire Women, Frank's vegetarianism seems to have lapsed when he devours several chicken-based Chinese food dishes.

His many deaths and injuries

On two occasions, the Mads try their hand at riffing. In episode #323: The Castle of Fu Manchu, taunted by Joel and the Bots, they make a weak attempt at riffing, but fail miserably. In episode #611: Last of the Wild Horses, in a parody of Star Trek episode "Mirror, Mirror", TV's Frank and Dr. Forrester become the SOL captives and spend part of the episode providing all the riffs. Dr. Forrester comments as they enter the theater that he wasn't going to carry Frank in, a reference to Joel or Mike regularly carrying Tom Servo into the theater.

Frank appeared alongside Dr. Forrester (with Joel and the Bots somehow back on the SOL) in a special feature on the DVD of The Giant Gila Monster. 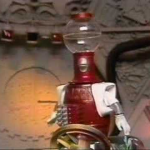