Timothy Farrell (1922-1989) was an American actor. He was sometimes credited as Tim Farrell, or Timothy Farell.

He appeared in several films written and/or directed by Ed Wood.

In addition to his work as an actor, Farrell also had a career in law enforcement, which was later tainted by scandal.

Appearing (center) in The Violent Years 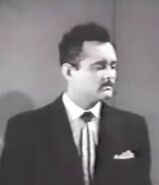 Appearing in Glen or Glenda
Add a photo to this gallery
Retrieved from "https://mst3k.fandom.com/wiki/Timothy_Farrell?oldid=59410"
Community content is available under CC-BY-SA unless otherwise noted.