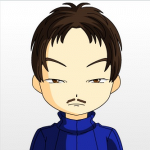 I'm a specimen of the (arguably) rare species of German MSTies, so I got introduced to the whacky world of Joel/Mike & the Bots through the dubbed version of the movie and random episodes and clips on sites like youtube. My favourite character so far is Crow (as you can see by my infobox) because he's just hilarious! :-)

As I'm also an Anime Otaku and quite a Japanophile, all these Kaiju Monster Films that were featured on the show should be kinda pleasing to the eye as there aren't much things more funny than watching a stuntman in a rubber lizzard suit with visible zippers attached to it stomping and ravaging through a Märklin-type city diorama.^^

Retrieved from "https://mst3k.fandom.com/wiki/User:Vegeccolo?oldid=31590"
Community content is available under CC-BY-SA unless otherwise noted.