Wil became an actor at an early age. He appeared in several commercials and print ads. In 1986, he co-starred in the film Stand By Me, and the following year he was cast as Wesley Crusher on the TV series Star Trek: The Next Generation.

After Star Trek, Wil appeared in several films and TV series, including a recurring role as a fictionalized version of himself on The Big Bang Theory. He is also an author, producer, and podcaster. 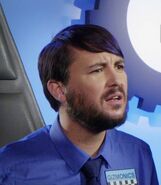 Appearing as Drake in Experiment #1101 - Reptilicus
Add a photo to this gallery
Retrieved from "https://mst3k.fandom.com/wiki/Wil_Wheaton?oldid=51970"
Community content is available under CC-BY-SA unless otherwise noted.