William Schallert (July 6, 1922 – May 8, 2016) was an American actor who played hundreds of different roles in television and film.

Born in Los Angeles, California, Schallert is best known for playing the father Martin Lane on The Patty Duke Show, and for his appearance as Nilz Barris in the Star Trek episode "The Trouble with Tribbles".

Schallert also appeared in the film-within-a-film in the Joe Dante-directed movie Matinee, which satirized the type of monster movies often used on Mystery Science Theater 3000.

From 1979 to 1981 Schallert worked as President of the Screen Actor's Guild. After his term ended, he continued working as an actor up until 2014, when he appeared on the television series 2 Broke Girls. Schallert died in Pacific Palisades, California on May 8, 2016 a little less than two months before his 94th birthday. 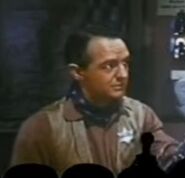 Appearing in Gunslinger
Add a photo to this gallery

Retrieved from "https://mst3k.fandom.com/wiki/William_Schallert?oldid=50553"
Community content is available under CC-BY-SA unless otherwise noted.